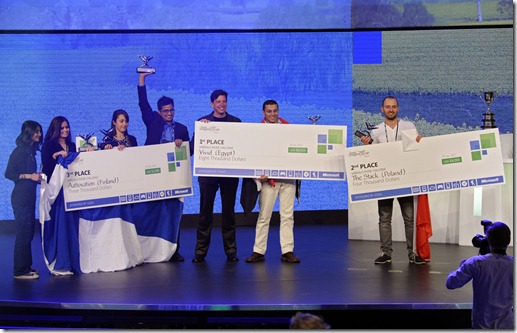 · Tell us briefly about your project/ the idea/ what does it do.

The problem: In our country, Egypt, public hospitals are the main provider of the healthcare service. This public sector suffers from the lack of IT infrastructure, because there is no much money. As a result, a patient’s medical record is saved manually in a paper file called: patient’s ticket.

Saving medical records of patients with such old-fashioned way has the following bad consequences:
– No data access
– No data integrity
– Data saving/achieving difficulties

So, the problem is simply:

The Challenge:We need a solution that offers the services of IT Infrastructure to the public hospitals, without need to buy new hardware. Just depending on the currently available hardware (mobile phones with internet connection).

The Idea: Talking to stakeholders gives us a clear picture about the problem dimensions. It is found that 63% of doctors (in public hospitals) hold a smartphone/ touch-based phone with a low-cost internet connection available every day. This inspired our team to think about presenting the medical information of patients to the doctors via mobile phones, instead of depending on computers.

So, we built a mobile-phone-based solution. Our solution, Health Buzz, consist of two main parts:
The first part (front-end) is a mobile application developed for Windows Phone devices. Users (as physicians, patients and pharmacists) can access the electronic medical records of patients using an internet connection. They can manipulate / retrieve and save data to the cloud.
The second part (back-end)is a cloud computing service based on Windows Azure technology. The service is to be used in saving / retrieving and manipulating medical records (data). The cloud service maintains the solution’s main goal: building low-cost software with the currently available hardware. Just mobile phones, cloud service and little amount of money for subscriptions.

· Tell us about your team history, how did you meet and how you agreed on the project idea?

Team Vivid currently consists of two members. We are classmates and friends who recently graduated. We know each other like almost 7 years. At the beginning of their last academic year, Nour El-Dien wanted to compete in the new season of the Imagine Cup competition. Once, he had experienced the problem of accessing the patients’ medical records in public hospitals. He proposed the problem to his teammate, Muhamma El-Orabi. They began to do their internet researches about the problem in Egypt and how can they solve it. The result of their internet researches and the facts they found were very inspiring. They just decided to take it to the next level and begin working on their next new idea, which eventually became ‘Health Buzz’.

Muhmmad Mousa El-Orabi
He is a fresh graduate of Faculty of Computer and System Engineering, University of Ain Shams, June 2012. He is lucky to win the 1st place in his 1st Imagine Cup Experience.
He is interested in developing embedded systems. In his last project (graduation project), he and his group built and developed the Car Black Box. On the personal side, he likes to help his classmates. He is well known in class as a humble, funny, helpful and friendly classmate. He is simply loved by everyone.

· Did you expect that you would be one of the top three teams worldwide? How it feels like? 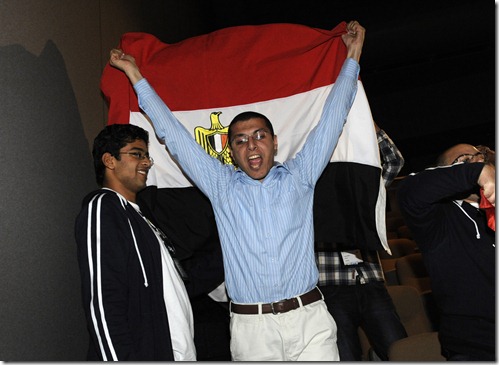 This year, our team was competing in the Software Design category beside the Windows Phone challenge. Nour El-Dien has won the 1st, 3rd places in the same competition in the past two years. So, when we were knocked out from the 1stround of the software design local finals, we simply got shocked. We said: “At least, we should have reached the final round of the local finals, what a shock!”

We did not knew what to do. But we stayed calm and decided to complete the competition in the Windows Phone category. When we passed the 1stround (top 100) we felt more stressed and we couldn’t have imagined to reach the finals (top 3).

I can remember the announcement day of the world finals (top 3), Nour El-Dien kept gazing at the laptop screen for a while. He kept scrolling the result page up and down like he could not believe himself and finally said: we will go to the land of kangaroo, we will go to Australia.

· What do you think is what helped you winning this competition?
I can mention the main points:
– Nour El-Dien has a great previous experience in the Imagine Cup Competition.
– Sticking to the rules of the competition.
– Apply the concept of ‘launch early and often’. An app can take years of development until it reaches readiness and perfection, but you are time and effort limited. So, focus on the main features and try to present at least one big happy scenario in your app that leverage the main concept and idea.
– Good team spirit, devoted to the idea, project and the competition.
– The bad need to achieve a worldwide rank in the competition after successive 3 years of trial.
– After all, I still believe in destiny, the result is due to reconcile of Allah (our Almighty GOD).

· What is the best thing that has happened to you since your journey to Sydney started? 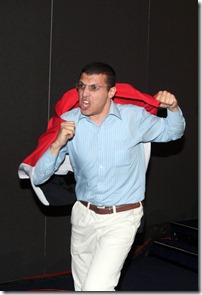 There are many good moments:

– Travelling for a very far place. The travel experience is awesome. Sydney is a very wonderful city. We have to confess that we had a civilization shock when we visited Sydeny. Even, Nour El-Dien who has previously visited Warsaw, Poland, he got shocked by

– Winning a worldwide rank. It is the 1st time in Egypt, Arab World, Middle East and Africa a team won the 1stplace in the Imagine Cup competition since it has started 10 years ago.

But for sure, the best moment at all is when the 1stplace was announced, Egypt name was pronounced and Nour El-Dien waved proudly his country’s flag on the stage and then gave a short word.

I have to mention that the worst moment is when Muhammad El-Orabi got his visa refusal just 20 hours before the takeoff time of his departure flight. He was left alone with nothing to do! What made it worse is that Microsoft Egypt has not moved an inch to help. Things are really really so tough in the Australian embassy in Cairo. All the other teammates got refused at least one time before they finally granted the Australian Visa.

· Who supported and helped you achieving this? Who you, as a team, want to thank?

– My family (father, mother and siblings): for financial support and building the comfort platform required to focus on my projects.

– My friends, teammates and classmates.

– Registration team of the Imagine Cup 2012 World Finals. They really did a great job. They replied on mails fast. They were very patient, helpful, cooperative and supportive.

· What are your team future plans?

In the short term:

Continuous development is a major key to successful software. The following points are scheduled on the project development cycle:

Also, our team has applied for Microsoft Startup Program and we got accepted. We are supposed to start in the 2nd of September. This is good step to take our project to the next step: real life.

In the long term:

Besides working hard on pushing our startup forward, our team is keen on developing ourselves. We are very interested in applying for master degrees in the fields of computer engineering/software.

· Any Message you want to give to the students? How do you encourage them to join Imagine Cup next year?

I want to say simply: ‘devote yourself to an idea, go make it happen, struggle on it, overcome your obstacles and fears, keep trying, smile and don’t you forget: this is your DREAM’.

If you ever tried and faced obstacles, you have nothing to do but trying again. Because without trying again, all your past trials are nil. I kept trying to admit for the visa until I was grated the visa in the 3rdtime, just 20 hours before my flight takeoff time. Even thought, I have to issue the Travel Permit from the Military Authority just 3 hours before my flight takeoff time.

Nour El-Dien, Vivid team leader, message to students who think about participating in IC next year!

Special thanks to:
1) Nour El-Dien Mahmoud, Vivid team leader, for his corroboration and time in answering the interview questions and making this post comes to life.
2) Abdullah Al Nady, a fellow MSP from Egypt for his help contacting Vivid team.